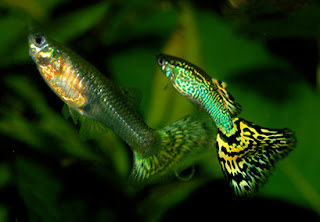 Food: Guppies eat a wide range of food. From home made grain based food to flaked foods. They can also eat Daphnia, bloodworms and Brine Shrimp

Temperature : Guppies are tropical fish. The recommended temperature range is 22 to 26 degrees Celsius.

Sexing: Male guppies are brightly colored with markings all over the body. Females are have dull colored bodies with colored tails.

How do we distinguish between male and female guppies ?

Male Guppies are bright in color and have markings all over their bodies. Female guppies have markings only on the tail. The body is dull colored, often semi-transparent. Females tend to be larger than the males.

The Gravid Spot in guppies

Observing the g
ravid spot will give an indication of the stage of the pregnancy and the approximate time of delivery.  The gravid spot is most visible in female Guppies.

Can guppies live with Goldfish ?

Guppies and Goldfish are non-agressive species which are ideal for beginners. While guppies and goldfish can live together. There are many problems one will encounter. Goldfish will grow bigger over time. While goldfish are not aggressive, they may consider anything smaller than their mouths to be prey.

You may find a few guppy missing over time. Another problem is the difference in bio-load. Guppies do not excrete much and thus have a smaller bio-load.

Goldfish on the other hand, eat voraciously and almost continuously. Hence, they produce copious amounts of excrement. This may dirty the water and the water needs frequent changes. If the tank is not maintained properly, the guppy will be affected by the high ammonia levels.

In community aquariums, the world over, guppies live with goldfish. Ensure that there are adequate plants for smaller guppies to stay and avoid the goldfish. Perform water changes regularly to keep the water clean.