June 24, 2019
Once upon a time, there was a forest in the southern part of India.  The forest was thick and mountainous.  It was home to dozens of different animals and birds.  There were also many other monkeys in the forests.

The monkeys moved around in groups.  Changu was one of these monkeys.  He lived along with the others in the forest.    However, he was very greedy.  He would always keep looking for things to eat.  He never shared anything he found with his fellow monkeys. 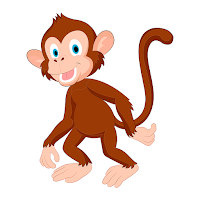 While the other monkeys would stop eating when they had had enough, Changu would eat even after his stomach was full.  If he saw any young or weak monkey with a banana or any other fruit.  He would pounce on the helpless creature and snatch its food from its hands.  No other monkey dared to stop him.  Changu was big and hefty in build.

One day, a hunter came to the forest.  This hunter specialized in trapping monkeys.  He would sell those monkeys to zoos where they would be kept as exhibits for the people to see.  Sometimes, he sold monkeys to circuses as well.  At circuses, the poor monkeys would be trained to perform tricks and antics to please the spectators.

It was indeed a cruel sight.  To see these free creatures of the forest either imprisoned in zoos or made to perform tricks.    The hunter had come today to the forest to catch a few monkeys.  He hoped to catch some big ones.  Big monkeys were the ones the zoo owners preferred.  They were ready to pay a handsome price for them.

The hunter set up his trap.  It was an ingenious trap.  It was not a cage like other traps.  It was a small bottle which was chained to a tree.    It did not look like a trap at all from first appearances.
Changu had few friends in the forest.  Few animals wanted to keep company with such a selfish and ill-mannered creature.  Changu did not mind.  He wanted his way and he had it.

Meanwhile, the hunter had set up his ingenious trap.   It was evening, when Changu reached his tree with the fruits.  He carefully put the fruits he had collected that day in the hollow of the tree trunk.  The place was a closely guarded secret.  Changu looked around and he saw the new bottle.  The bottle was made of metal.  He went near to inspect the strange bottle.  The bottle was open.  It had a large neck.  Curious, Changu put his hand into the bottle.

The neck was narrow.  He could barely squeeze his hand inside.  As he felt his way inside, he felt small nuts inside.  He felt them over.  He was overjoyed.  They were indeed nuts.  And what more! They were cashew nuts.  He was delighted.  He had eaten cashew nuts a long time back.  They were rare in the forest.

He tried to take them.  It was then that he discovered the problem.  His hand would not come out with the nuts.  The neck of the bottle was designed such that only an empty hand of the monkey could pass through.  He had managed to squeeze his palm inside when it was empty.  But his palm full of nuts was too big to come out.

He tried to tilt the bottle down.  He could not as the bottle was fixed to a tree trunk by a metal pipe.  He looked around.  There was no one.  He waited and thought.  How could he abandon the cashew nuts?  It was then that the saw a slight rustle among the nearby bushes.  A hunter ran towards him with a spear and a net in his hand.

Changu was alarmed.  He wanted to run but his hand was trapped.  He could have dropped the nuts inside the bottle and withdrawn his empty hand out.  But he did not have the heart to do so.  He was too greedy for that.

The hunter came closer and closer.  Changu still held on to his bottle and the nuts.  In no time, a net fell upon him.  He was trapped.  The hunter called out to his friends who were also in hiding.  They came and bundled Changu into a waiting vehicle.  He was thus led to a life of captivity.

Children, the moral of this story is that Greed leads to Destruction.  Changu could have taken out his hand from the bottle.  But he was not in a mood to let go of the nuts.     There are many people who go after easy riches and get entangled in various troubles.  We need to be happy and thankful for what we have.