The Proud and Foolish Woman and her Rooster

June 24, 2019
Chandramati had lived in the village for many years.  She was an old woman.  She lived in a small house with her husband.  Her children had moved on to the city.  Chandramati had a field where she grew some crops and raised some chickens which she sold in the local market.

Life in the village went by a slow pace.  The day began early in the morning when the villagers woke up.  They quickly set about lighting their stoves and preparing food after which they went to work in the neighbouring fields.

Among the many chickens that Chandramati had, there was a rooster.  The bird was the pride of Chandramati.  She loved it the most of all her chickens.  The rooster had a bright plumage (feathers) and luxuriant tail.  It had a bright red crest on the top of its head. Everyone in the village admired the handsome bird. 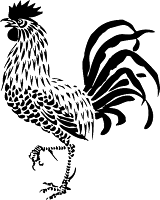 Chandramati was the first one in the village to light her stove in the morning.  Soon, as the first rays of the sun appeared, her rooster would crow.   Its loud cock-a-doodle-do could be heard across the small village.  The villagers would get up on hearing its call announcing the birth of a new day.
On getting up, Chandramati would first kindle the fire in her home.  It would be sometime before she could see the first embers in the stove.  She would have to blow into the stove with a long metal pipe to keep the embers alive and to build a fire.  Soon, the flames would rise high.  Chandramati would then set a pot of water to boil in the fire as she prepared some tea.

By now the other villagers stream to her house.  To save the trouble of struggling to light a fire in their own homes, they would go to Chandramati’s home, light a bunch of twigs and carry the fire to their own homes.

Chandramati was held in high regard by all the villagers.  She too felt happy about herself.  The villagers were able to get up in time and prepare the cooking only because of her, she thought.  What would happen if she wasn’t there in the village?.   Soon, she became very proud and haughty.
She began to think that she was indispensable.  “How will the villagers know the right time to get up and how they would light a fire.” she wondered, “The poor and ignorant villagers would be confused and their lives would be turned upside down without me”.

One day a wicked plan occurred to her proud heart.  She decided to leave the village without informing anyone one evening and move to another village for a few weeks.  She imagined the confusion in the village in her absence with no one knowing the time to get up and how to light a fire.  Then, she thought, the people of the village would appreciate her importance.  After a few weeks she would return to the village.  And then, the people would thank her for returning and treat her like a queen.  Such were the foolish ideas in her mind.

One evening, Chandramati and her husband picked up their belongings and their chickens including her prized rooster.  Locking their house, they  went away to a village a few miles away.  Chandramati had a cousin in that village.  She stayed in her house.  Three weeks passed by.  Chandramati was curious to see how her old neighbours had fared in her absence.  She imagined them struggling to get up in time and go about their daily lives.

Chandramati returned to her village after the three weeks.  Everything was as she left.  She was puzzled.  She wondered how everyone got up in time and lit their stoves.  That night she lay down as usual.  She would find out how people fared the next morning.

At daybreak, Chandramati was surprised to hear the cry of a rooster.  It was not her bird.  She knew its voice.  Curious, Chandramati came out of her house to see the new bird.  She was shocked to see a bird more handsome than hers perched on the fence of Sohansingh, her neighbour.  He had bought the bird at a market during a fair in the neighbouring village.

Chandramati was in for a greater shock to see people queuing up in front of his house to carry fire from his home.  Soon, she discovered that no one bothered about her.

The villagers had found a new way of waking up in the morning and lighting their stoves.  She lost the respect and importance she earlier had in the village.  She was not such an important person, after all.  She realized her pride and foolishness.

Children, this story teaches us to be humble.  We should never think of ourselves as indispensable.  Anyone can do the job we are doing.  We should be happy to contribute in whatever way we can to society and to those around us.