The Snake and the Frogs in the Well

June 24, 2019
There was an old abandoned well in a forest.  It was a very old well.  Once upon a time, the well was full of water and people from the surrounding villages used to draw water from it.  However, over the years, the well had gradually fallen into disuse.  The water level in the well had gradually fallen as the rains had failed for a couple of years.  The water was now muddy and unfit for use for either drinking or washing.  People no longer came to draw water from the well.

The well was now home to a colony of frogs.  The frog lived by eating the little insects which lived in the water.  On the wall of well were some small steps which led out of the well and into the forest.  Sometimes, the frogs would hop up the steps and reach the land outside the well.  They would move around in search of some food.  They would be lucky to find a tasty grasshopper or a dragonfly.  Having eaten their fill, they would then return to the safety of their home in the well.

This went on for several months.  One day, a quarrel broke out between two frogs over an insect both of them claimed to have caught.  They two frogs argued with each other.  Soon their friends joined in support of the two frogs.  The argument soon turned into a bitter fight with the other frogs taking sides.  Thus the colony was divided into two groups now.  The frogs stopped talking to one another.  The two groups of frogs divided the well into two parts.  From then on, the frogs did not venture on to the group of the rival side.  They caught insects on their side alone.

This hostile environment continued for many days.  One day, another fight broke out between two frogs belonging to the rival groups.  One group claimed that a frog from the opposite side had entered their area to catch an insect.  The fight became very violent and many frogs were injured in the clash.
One day, a particularly violent fight left many frogs injured.  The leader of one of the groups, Rajayona was also among the injured frogs.  Rajayona was an elderly frog.  He was angry at the insult.  He could not move for many days.  After he recovered, Rajayona decided to take revenge on the other frogs.  He could not live together in the same well with them.  He pondered over what he could do for many days.  He and his friends could not defeat the other group of frogs.  They were too strong for them.

One day, Rajayona hopped over the steps of the well and came up to the forest.  The previous few days had been too much for him.  Bruised and battered, he now needed some fresh air and a change of environment.  The forest and its many delights had a soothing influence on him.  Rajayona, though, was still angry and resentful. 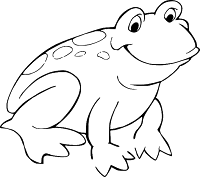 The tortoise told him that he knew of a snake which lived further away.  The snake, he said, would gobble up his enemies.  Rajayona was too angry to think much of the idea.  He just wanted to get rid of the rival frogs.   Nevertheless, Rajayona was afraid of the snake.  But the tortoise reassured him saying that the snake would eat only the frogs he was asked to eat.  Rajayona was still nervous.  The tortoise then took him to the snake’s hole under a rock and called out to the snake.  The snake slithered out of its hole.  The tortoise told the snake of Rajayona’s plight and asked for his help.
The snake gladly agreed.  He was happy at the prospect of easy meals for a few days.  Rajayona, thus led the snake to the well.  The sight of the snake led the frogs scurrying under water.  The snake crawled down the well and found a hole in the wall of the well.  It made its home there.

Over the next few days, the snake gobbled up the enemies of Rajayona one by one.  Rajayona was pleased.  He had gotten rid of his enemies.  The well would now belong to only him and his friends.  Soon, all the frogs of the rival group had been eliminated.  Rajayona and his friends were delighted.
But their joy was short lived.  A week later, Rajayona was shocked to find one of his own followers go missing.  The other frogs searched everywhere in the well.  Scout parties were sent into the forest to see if the frog had gone to the forest.  But no trace of the missing frog could be found.  A few days later, two more frogs went missing.  Rajayona was now greatly disturbed and rather frightened.

He now knew what was happening.  The snake was hunting his own followers.  He cursed himself for being such a fool.  Consumed by anger and a thirst for revenge, he had brought about the destruction of his own kind.  But it was too late.  He was too afraid to confront his snake.

That evening, he quietly summoned his followers and told him about the tragedy that was unfolding.  His followers were too scared even to speak.  The next morning, before dawn, the Rajayona and his followed sneaked out of the well.  The snake was asleep in its hole.

Rajayona and his followers reached the forest.  They were homeless now.  They spent the rest of their lives wandering about the forest.  Every now and then, Rajayona would think of the well and the happy times he spent in it along with the other frogs and how he lost it because he wanted to see his rivals punished.

Children, this story tell us how we should always be able to reconcile our differences even with people who differ with us.  Had the frogs sorted out their differences when the first argument over the insect had cropped up, all of them could have lived in peace in the well.