June 24, 2019
Chandrakant was a merchant who lived in the town of Saharanpur.  He had a flourishing business there.  He traded in glassware.  His shop was well known for the variety of glassware he offered.  His customers were from the many nearby towns and cities.  Needless to say, he was a very wealthy man.  Chandrakant was also a philanthropist.  He was a kind and generous man who donated liberally to charities and to people in need.

One day, Chandrakant was passing through a forest.  He was returning after attending the wedding of his friend’s daughter.  It was evening and the sun was beginning to set.  He saw a goat struggling in the distance.  The goat was being chased by a pack of wolves.  The goat was tired and exhausted.  Just as Chandrakant was watching, it fell down.  The vicious pack of wolves, pounced upon the defenceless animal.  They bit it with their sharp teeth.  The goat was wildly flailing its feet in a bid to fend off the assault.  But it was useless.  The wolves were too many. 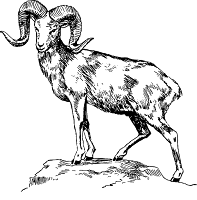 Chandrakant was shocked at this cruel sight.  He rushed to the spot.  His servants who were travelling with him, seeing their master, rushed there too.  Each one of them was carrying a stout stick as a protection against thieves.

They rained blows on the frenzied wolves with the sticks.  The wolves fled from the spot with yelps of pain.    With the wolves driven off, Chandrakant bent over the poor goat.  The goat was badly bitten and was in great pain.  He asked one of his servants to fetch some cloth and bandaged the goat’s wounds.

Looking around, He spotted a plant in the forest.  He knew that its leaves were good medicine for wounds. A servant made a paste of the leaves with a stone and applied it to the goat’s wounds.  Chandrakant had an idea.  He would take the goat home.  One of his servants, gently lifted the goat and placed it across his shoulders as if it were a child and carried it home.

Chandrakant, kept the goat in his farm and tended to it.  The goat soon recovered completely.  A few weeks later, the goat gave birth to a young kid.  Chandrakant was immensely happy.  He considered the goat auspicious.  He named the goat Lajwanti.   Lajwanti gave milk to Chandrakant’s household.  This set Chandrakant thinking.  “Why should I not buy more goats?”, he thought.

He ordered a trusted servant to go to the weekly market and buy four goats.  The servants did as he was told.  Soon, Chandrakant had a flock of goats at his home.  He took great care of his goats.  But, he always had a soft corner for Lajwanti, his first goat.  He made a special silken stole which he put on Lajwanti’s neck.  Lajwanti was white in colour and the silken stole looked good on her.  Lajwanti was very happy with the special cloth.  However, she soon became very proud.  She began to think that she was a special goat.

The other goats noticed the change in her.  “I am a special goat, why should I mingle with the other goats?”, she told herself.  When the servants took the goats out to graze in the grasslands outside the town, Lajwanti kept her distance.  She always walked behind the other goats, as a mark of her perceived superiority, the silk stole around her neck fluttering in the wind.

Every now and then, the servants would try to nudge her to move fast along with the rest of the flock.  But Lajwanti would not listen.  The servants, knowing that that Lajwanti was their master’s favourite, left her alone.

One day, the flock had gone grazing as usual.  Lajwanti had gone with them.  It was raining and dusk fell earlier than usual.  The servants were in a hurry to get the flock home.  Lajwanti as usual was walking behind the flock.  The servants shouted, cajoled and prodded the flock to walk closer and faster.  But Lajwanti, as usually, did not pay heed to their calls.

It was soon quite dark.  The servants had forgotten about Lajwanti.  They assumed that she would have joined the flock.  Lajwanti, though, had fallen far behind.

Unknown to Lajwanti, a pack of wolves was wandering close by.  The pack was in search of prey.  One of the wolves spotted Lajwanti.  Soon, the whole pack had pounced on her.  By then, it had started raining.  The servants and the flock had moved and were sheltering in a cave far away.  There was no one to save Lajwanti this time.  The wolves killed her and ate her.

Children, this story teaches us to follow the instructions of those who are there to guide us.  It also teaches us not to be proud.  We need to mingle with others and be friends with everyone.