Home » deer » story » wolf » The Wolf and the Little Deer

The Wolf and the Little Deer

in deer, story, wolf - on June 24, 2019
One upon a time there lived a small deer in a jungle.  The poor animal was an orphan.  Its mother had died a short while after he was born.

However, the little deer had managed to survive. He had found a small patch of grassland near a stream. The area was walled off  by sharp rocks and thorny bushes.  There was a narrow entrance through the rocks. 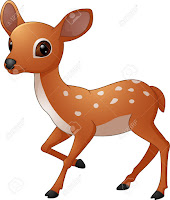 There was a wolf in the jungle.  The wolf was a mean and dangerous creature -a ruthless predator who would not spare any small animal he could get his paws on.    He chanced upon the rocky area while wandering in search of prey.   His sharp nose soon picked up scent of the little animal.  The poor deer was fast asleep in its shelter.

The wolf came closer and looked at the deer.  The deer, oblivious to the danger, was sleeping peacefully.  The wolf was disappointed to see that the deer was small.  He thought that he could feast on him.  But this little animal had only skin and bones.  He would provide very little meat.

The wolf hit upon a plan.  “I will fatten this animal for a few months”, he said to himself, “then, when he is plump enough, I will have him for food.”  The wolf stayed there while the deer slept.

It was evening when the deer awoke.  As he looked around, he was terrified to see the wolf.  The poor animal had never seen a wolf before with its sharp fangs and angry gaze.  The wolf sensed this.  He quickly put on a deceptive smile on his face.

“Little One! Do not be afraid.  I am not here to harm you.  I am only here to help you.”, he said.  The little deer was confused.  The wolf went on,”Your mother appeared in my dream yesterday and told me to take care of you.  She also showed this place where you live.  That is how I found you.”  Hearing this, the deer began to trust the wolf.  The wolf was pleased.

“Thank You, so much for your kindness”, the deer said.  The wolf gave a wicked grin.  From then on, the innocent deer began to trust the wolf completely.  The wolf took the deer along through the jungle.  He took him to places where there was plenty of grass.  The deer enjoyed the company of the wolf.  He was thankful for the wolf’s supposed kindness.

The other animals of the jungle observed the strange relationship of the wolf and the little deer.  The had never seen anything like this before.  The wolf would accompany the little deer almost everywhere.  The peacock was also observing this.  He was a kind bird.  He had lived in the forest for many years.  He knew that the wolf had some wicked plan.

A few weeks later, a rabbit which lived in the forest gave the same warning to the little deer.  He, too, had been observing the wolf.

By now, the deer had grown bigger.  The wolf was observing the deer greedily.  The deer had noticed the strange glances.  He wondered what the wolf was thinking.  He thought about the warnings had had received.  Soon, he understood that the wolf had some other plan regarding him.  He began to observe the wolf more closely.  The more he observed the more he became convinced that something was amiss.

The deer was getting fatter day by day.  The wolf began to sense that the time was right.  He began to put the final part of his plan to action.

One day, the deer was grazing atop a cliff.  The grass there was particularly sweet.  The wolf came near the deer with a  fake smile.  He came slowly towards the deer.  The deer began to sense danger.

The wolf came near and pounced on the deer.  But the alert deer deftly stepped aside.  The wolf lost his balance and tumbled over the cliff and fell into the deep valley below.  That was the end of the wicked wolf.

The deer was shaken by the sudden turn of events.  He went back to the forest and thanked the animals for their warning.  He lived there for many  years in peace.

Children, this story teaches us not to trust anyone blindly.  We must always be careful when people seem too friendly or helpful.  If we observe anything strange we must pay attention and talk to our parents or teachers.