Some Aquarists prefer to have dedicated tools for their aquarium, particularly if it has live plants. Aquarium tools are useful for trimming and pruning the plants. They can also be used to arrange gravel, remove dead fish and scrape the aquarium surfaces to remove algae. 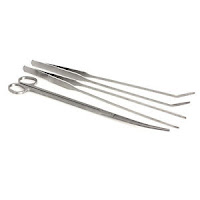 Fish are cold blooded animals. They cannot regulate temperature on their own and are thus extremely sensitive to temperature. Hence, the temperature within the aquarium should be within the limits experienced by the fish in its original natural environment.

Today, fish which were once present in one part of the world are found in aquariums the world over. Hence, special attention should be given to learn about the temperature requirements of each fish and maintain the temperature.

In cold climates, fish may need a heater to increase the temperature.

Aquarium heaters are heaters encased in a ceramic tube. The tube is immersed either partially or fully in the water. The heaters have a thermostat which can maintain the heater temperature.

Chillers are used in Aquarium to reduce the temperature particularly during hot seasons. When the temperature rises, the oxygen level in the water drops. Fish, being cold-blooded, are very sensitive to rise in temperature and may be come stressful.

The Deep Ocean is always cold. Hence, if you have deep sea species in your marine aquarium, you must have chillers.

Some aquariums need both heaters and coolers at different times of the day or at different seasons of the year. In such cases, there are temperature control units which have equipments for both heating and cooling.

Chillers reduce the temperature of the water by removing heat. Thermoelectric Chillers are used for small aquariums up to 55 gallons. For larger Aquariums, inline chillers need to be used.

There are also Drop in Chillers which are placed directly in the tank or in the sump. 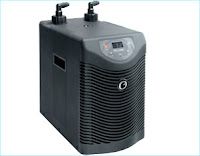 A sump is a separate tank placed behind or below the main aquarium. The function of the sump is to house the equipment which may be unsightly. Equipments such as filters, sterilizers, heaters and chillers can affect the aesthetics of the tank.

Hence, in large tanks, a separate tank which is connected to the main tank serves as the sump.

Reef Tanks always have an sump as part of their design.

A Power head is a pump which sucks water from the tank and passes to to devices such as filters or UV sterilizers. Power Heads are available in a variety of formats from hang on types to submersible ones to externally fitted power heads. 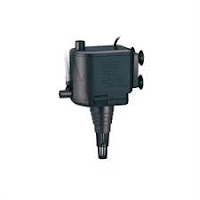 Power heads can be used to create water flow patterns which simulate the natural flow in streams and rivers.


Timer for lighting in Aquarium

Fish need proper and cyclic lighting which simulate the natural day/night conditions. Switching on the Light the whole time or switching it off the whole time may interfere with the fish's daily cycle.

An Aquarium Lighting Timer automates the task of switching the light on and off. Light can be switched on for a pre-set duration and switched off. This is ideal for light control on a daily basis or during vacations.

Timers can be connected with any aquarium light. Some timers also enable the gradual dimming or brightening of the light to more closely light cycles in nature.